Renal medullary carcinoma (RMC) is uncommon yet an aggressive form of renal cancer. Most patients present with metastatic disease. Systemic therapies recommended for clear cell carcinomas have not been well investigated for RMC. This report illustrates a case of a young female diagnosed with metastatic RMC and treated with 4 lines of systemic therapy. She remains alive and maintaining excellent quality of life more than 3 years after start of systemic therapy.

Renal medullary carcinoma (RMC) is a subtype of non-clear cell renal cancer accounting for less than 1% of all the renal tumors. It was first diagnosed two decades ago as an example of renal disease associated with sickle cell disorders[1]. Metastasis occur in 70%-95% of the patients at diagnosis or shortly thereafter[1,2]. Earlier series report a dismal outcome with median survival of 15 weeks[1]. Later reports described modest benefit from cytotoxic chemotherapy. However, most patients die within a year of starting treatment[2,3].

A 25-year-old single female known to have Sickle cell trait developed right loin pain and hematuria. She was found to have a large right renal mass on computerized tomography (CT) scan. There was no distant metastases. She underwent right radical nephrectomy in September 2014. The gross pathology reported a 6-cm tumor invading the perinephric fat and the pelvi-calyceal system. Lympho-vascular invasion was present and 3 lymph node contained metastasis. Pathological stage was pT3pN1. The microscopic examination revealed poorly differentiated carcinoma in the renal medullary region composed of sheets and nests of epitheloid/rhabdoid cells with moderate amount of cytoplasm and prominent nucleoli. The tumor cells stained positive for PAX8 and OCT3/4 and negative for CK7, CK20 and Uroplakin on immunohistochemistry. INI1 staining was not performed. Pathological diagnosis was consistent with RMC.

In January 2015, a CT scan showed a 1-cm mass in the surgical renal bed and enlarged aorto-caval and porto-caval lymph nodes. There was no intrathoracic or other visceral metastasis. The case was discussed at the multidisciplinary team meeting (MDTM) where lack of standards of systemic treatment for RMC was acknowledged. Options of treatment were discussed with the patient including targeted therapy and chemotherapy.

In February 2015, she opted to start with sunitinib at the standard dose (50 mg daily, 4 weeks on and 2 weeks off). Three months later, a CT scan showed increase in the size of the surgical bed and nodal target lesions measuring in longest diameter 2.1 and 2.65 cm respectively [Figure 1A].

Sunitinib was stopped and second line carboplatin and gemcitabine was commenced. An interim CT scan revealed reduction in the in the size of the surgical bed disease and in the aorto-caval metastasis. She completed 6 cycles of treatment. An end of treatment CT scan in October 2015 revealed reduction in the size of surgical bed and nodal target lesions to 1.04 and 1 cm respectively [Figure 1B]. This represents 57% reduction in size consistent with partial response according to the Revised Response Evaluation Criteria in Solid Tumors (RECIST) version 1.1 [Table 1]. The case was discussed again at the MDTM and surgery was not recommended. A routine follow up CT scan in March 2016 showed no evidence of disease progression.

In December 2016, she complained of mild right loin pain and a CT scan revealed increase in the size of the surgical bed mass and development of new lymph nodes.

Carboplatin and gemcitabine chemotherapy regimen was restarted. However, the disease progressed after 3 cycles with increase in the size of the surgical bed mass to 3.23 cm [Figure 2A]. Single agent doxorubicin at dose of 60 mg/m2 every 3 weeks was started in March 2017. The patient was admitted after the first dose with febrile neutropenia and thus the dose was reduced by 30% in subsequent cycles. An interval CT scan after 3 cycles showed reduction in the sum of the longest diameters of target lesions by 42% indicating a partial response [Figure 2B]. She completed 6 cycles in July 2017.

The patient remained asymptomatic until November 2017 when she complained of recurrence of the right loin pain. A CT scan showed increase in the sum of the longest diameters of target lesions by 41% consistent with disease progression [Figure 3]. Further options of management are limited and will be highlighted in the discussion section. 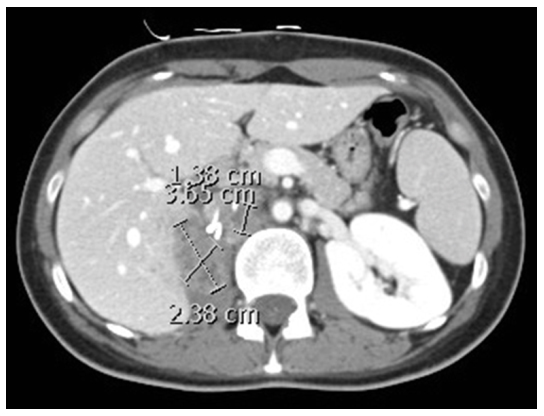 RMC is a rare form of renal cancer and hence only case reports and case series are found in the literature.

Typically, RMC affects young males below the age of 40 years and is associated with sickle cell trait in 98% of cases[2,3]. It usually presents with relatively large renal mass (average 6-7 cm). The right kidney is affected in 75% of cases[3,4]. About 70% of patients have metastatic disease at presentation[3,5]. Our patient fits this profile as she had sickle cell trait and presented with a 6-cm renal mass at a young age.

Microscopically the tumor cells encompass solid sheets of poorly differentiated carcinoma. Immunohistochemistry analyses show that the neoplastic cells are commonly positive for PAX 8, AE1/3, CAM5.2, CK7 and vimentin. CK20 and CEA are mostly negative[3,5]. RMC has to be differentiated from collecting duct carcinomas and urothelial carcinomas by immune stains. Histological and immuno-histochemical examination was consistent with the diagnosis of RMC in our case. Typically RMC cells do not stain for INI1. Absence of INI1 is considered to be associated with more aggressive tumor behavior[5].

In a literature based systematic review, Lacovelli et al.[6] identified 47 reports describing 165 patients with RMC between 1995 and 2013. Majority (42/47, 89%) of reports included < 5 cases each indicating the rarity of this condition. Median age was 21 (15-30) years. Male gender, Afro/American ethnicity and co-existence of sickle cell trait were associated with 70%, 93% and 97.7% of cases respectively. They found that 71% of cases had loco-regional lymph node involvement at presentation[6]. Our patient’s characteristics seem to fall within the portfolio described by Lacovelli et al.[6]. The overall survival was 4.0 months in patients with metastatic and 17.0 months in those with non-metastatic disease. Patients who received combination platinum-paclitaxel-gemcitabine had longer progression free survival when compared to other chemotherapy agents or targeted therapies[6].

Sunitinib, a vascular endothelial growth factor receptor tyrosine kinase inhibitor is a standard first-line treatment for clear cell metastatic renal cell carcinoma (cc-mRCC). The expanded access trial included 588 patients with non-clear cell histology. Response to sunitinib was reported in 11% of this subgroup. Median progression-free survival and overall survival were 7.8 and 13.4 months respectively[7]. The publication did not indicate the number of cases with RMC that were included in this trial. One can assume that the number of cases of RMC is too small if any.

International guidelines list sunitinib as a level IA evidence standard option for the treatment cc-mRCC. They also list it as a level IIB option for non-cc-mRCC[8]. For this reason and for its convenient oral route of administration, sunitinib was perceived as an acceptable first-line option for our patient. The tumor did not respond and progressed within 3 months of starting treatment. Similar outcome was reported in 6 patients with RMC on first line sunitinb[9].

More recently, Ezekian et al.[11] reviewed the United States National Cancer Database and identified 159 cases of RMC diagnosed between 1998 and 2011. Median age was 24 (20-31) years. Male gender and Afro/American ethnicity was associated with 71%, 87% of cases respectively. They found that 93% had lymph node involvement. Majority (91%) of patients presenting with non-metastatic disease underwent surgical nephrectomy. Median survival of these patients was 17 months indicating rapid relapse after curative intent surgery. The median survival of patients with metastatic disease was limited to 4.7 months. Indeed, in our patient the disease relapsed within 4 months from date of radical surgery. However, subsequent chemotherapy treatment may have contributed the relatively long survival (38+ months). Another possible explanation is that female gender seems to be associated with better outcome. Certainly, Ezekian et al.[11] reported longer survival in females compared to males (hazard ratio 0.5; 0.3-0.9, P = 0.02).

Due to rarity of the condition, it will be difficult to design and conduct therapeutic randomized clinical trials specifically for RMC. Thus, case reports and series are acceptable source to guide physicians.

Few reports described response to programmed death receptor-1 inhibitors such as nivolumab[12,13]. There is an ongoing clinical trial (ClinicalTrials.gov identifier: NCT02721732) looking at the effect of the pembrolizumab in rare tumors, including RMC.

Our limited experience supported by the reviewed literature suggest that platinum based combination chemotherapy and anthracyclins are appropriate options for patients with metastatic RMC.

All possible steps were taken to maintain patient’s anonymity and prevent the disclosure of identifying information in this report. Additional patient’s consent was not recommended by the institutional review board.

The institutional review board granted approval to write and publish the case report. 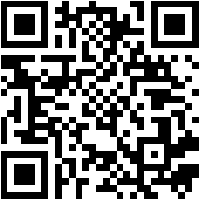