1Department of Cytobiology, Faculty of Pharmacy, , .

Aim: Investigation of the influence of parthenolide (PTL) on cytarabine (Ara-C) action in an acute promyelocytic leukemia HL-60 cell line and the role of oxidative stress in its action.

Results: PTL dose-dependently increased the percentage of dead cells. Cytotoxic and proapototic actions of PTL depend on the level of free radicals, because the addition of N-acetyl-L-cysteine (NAC) to incubation significantly reduced the effect of PTL. We did not observe a similar influence of NAC in the case of Ara-C activity. PTL significantly increased the cytotoxic and proapoptotic effects of Ara-C in comparison to the cytostatic drug alone. Interactions between the investigated compounds were mostly synergistic. NAC significantly reduced the cytotoxic effect of the combination of PTL plus Ara-C.

Conclusion: PTL can significantly increase the cytotoxic and proapoptotic effects of Ara-C in an HL-60 cell line and this may warrant further research to improve the efficacy of acute promyelocytic leukemia therapy.

In the case of the resistance of acute promyelocytic leukemia to all-trans retinoic acid (ATRA) induction treatment, arsenic trioxide (ATO) has proven to be an effective second line therapy[1]. In addition to binding to PML and inducing degradation of the PML-RARA fusion protein, an important element of ATO’s anti-leukemic action is the induction of oxidative stress[2,3]. However, double mutations limiting treatment with both ATO and ATRA also occur[1,4]. Considering that the cells of promyelocytic leukemia are characterized by an increased level of oxidative stress[5,6], and therefore may show increased sensitivity to cytotoxic effects of prooxidants, it is reasonable to seek novel therapies based on free radical mechanisms.

One such potential compound of plant origin, whose mechanism of antineoplastic activity is the induction of oxidative stress is parthenolide (PTL)[7]. This compound belongs to the group of sesquiterpene lactones. Thus, it has an α-methylene-g-lactone moiety with an alkylating activity and α-β-unsaturated cyclopentanone rings[8,9]. These chemical groups are assigned a role in biological activity of sesquiterpene lactones and they can be responsible for the mechanism of the antitumor action of PTL[9]. The lactone moiety may combine with cysteine residues present in the thiol groups of glutathione and enzymes participating in its metabolic pathway[7]. Thus, PTL is an inhibitor of GSH and in this way it can enhance the pro-oxidative effect in leukemic cells with disturbed homeostasis within the scope of oxidation-reduction mechanisms.

One of the cytostatic agents used to treat acute promyelocytic leukemia is cytarabine (Ara-C), a cytosine nucleotide containing arabinose instead of ribose[10]. After activation, it is inserted into the DNA in the S phase of the cell cycle and inhibits DNA replication[11]. Ara-C deaminates quickly with the participation of deaminase cytosine and becomes a biologically inactive metabolite[12]. In Ara-C-treated aeronautical materials laboratory (AML) blast cells, reactive oxygen intermediates (ROIs) may also be formed, which exacerbate oxidative stress, as confirmed in in vitro studies[13]. ROI may be responsible for the potentiation of Ara-C toxicity in these cells.

Given the above, it will be interesting to determine the role of oxidative stress in the interaction of PTL with cytarabine in leukemic cells. In addition to inducing oxidative stress, PTL is also an activator of p53, an inhibitor of NFkB and STAT-3[14,15,16]. The literature data show that there is a synergy between PTL and cytarabine in cells of different types of leukemia[7]. The type of interaction between PTL and cytarabine in promyelocytic leukemia cells has not yet been determined.

Considering that the induction of oxidative stress may be cytotoxic and may stimulate cancer cells to differentiate[17,18], it is reasonable to study the influence of PTL on acute promyelocytic leukemia cells and its interaction with Ara-C.

To detect dead cells, propidium iodide (PI) staining was used according to instructions from the R&D Systems Flow Cytometry Laboratory. Briefly, cells were administered with different concentrations of PTL and/or Ara-C. After incubation, the HL-60 cells were washed (230 g, 5 min), and then resuspended in 500 μL of PBS. Dead cells were stained with PI at a final concentration of 2 μg/mL and incubated for 15 min in the dark at room temperature. Subsequently, the cells were quickly analyzed using a flow cytometer (LSRII, BD Biosciences Immunocytometry Systems, San Jose, CA, USA). Blue and red lasers were used in the analysis of cells. Doublets or debris were excluded during the analysis using calculations of PI-width vs. PI-area.

The combination index (CI) and IC50 were specified using CalcuSyn (Biosoft, Cambridge, UK). The multiple drug-effect equation elaborated by Chou-Talalay was used in the estimation of CI. According to this equation, CI < 1 shows synergism, CI = 1 indicates an additive effect, and CI > 1 shows antagonism.

We identified early and late apoptotic and necrotic cells. After incubation with the compounds to be examined, HL-60 cells were washed in PBS and the pellets were suspended in HEPES buffer (Becton, Dickinson Biosciences, San Jose, CA, USA). The double staining method using annexin-V-APC (Becton, Dickinson Biosciences, San Jose, CA, USA) and propidium iodide was used to detect apoptotic and/or necrotic cells. For cells staining, we used the conditions set by the manufacturer. Stained cells were quickly analyzed with a flow cytometer (LSRII, BD Biosciences Immunocytometry Systems).

Nonparametric Mann-Whitney U test or one-way analysis of variance followed by the Tukey post hoc test were used to calculate the statistical significant differences between groups. Data are shown as means ± standard deviation of the mean.

Cytotoxic activity of PTL, Ara-C and their combination

Depending on the concentration, PTL significantly increased the number of dead HL-60 cells in comparison to the control [Figure 1A]. Ara-C at the doses of 5 and 20 μmol/L had a significant cytotoxic effect, increasing the number of PI-positive cells [Figure 1C and B] compared to the control. In contrast, Ara-C at a concentration of 2 μmol/L did not exert any significant cytotoxic activity [Figure 1B]. There is no significant difference between the doses of 5 and 20 μmol/L of Ara-C in terms of the amount of induced dead cells (P = 0.08). 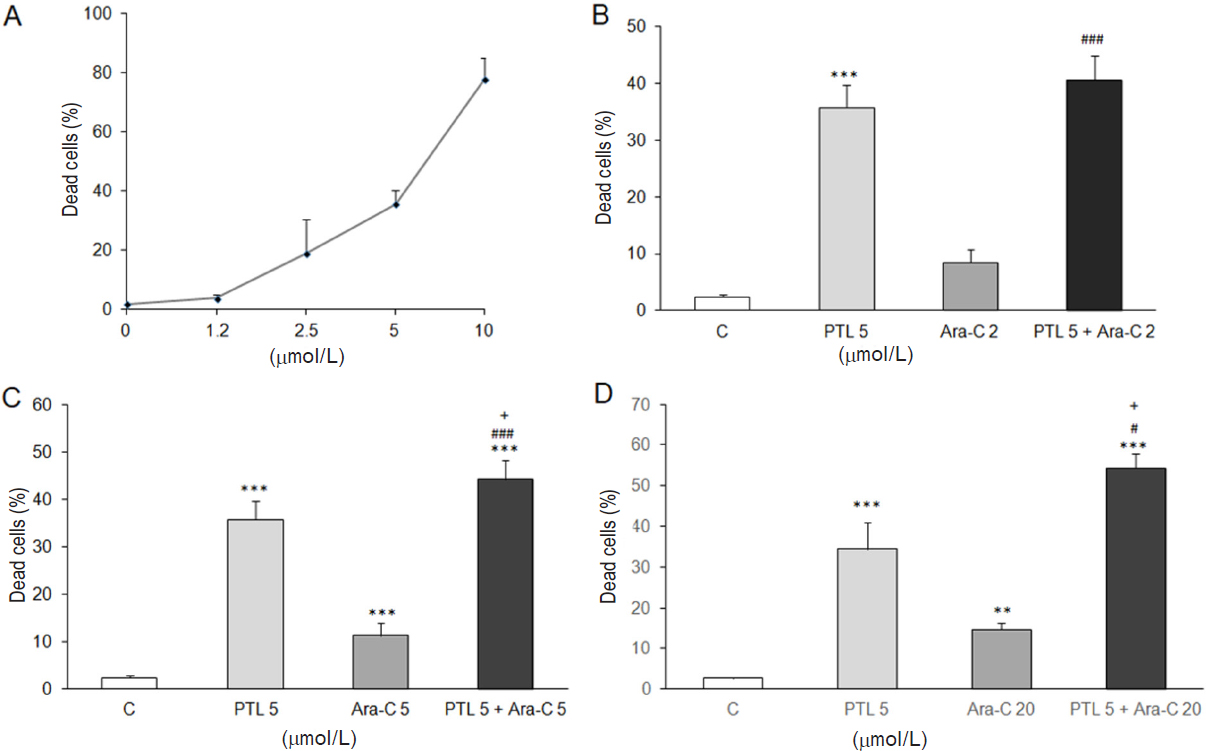 In the case of co-incubation, a concentration of 5 μmol/L of PTL was used, slightly lower than ED50 (results not shown), which in other studies exerted a cytotoxic effect on cells of patients with AML[19]. 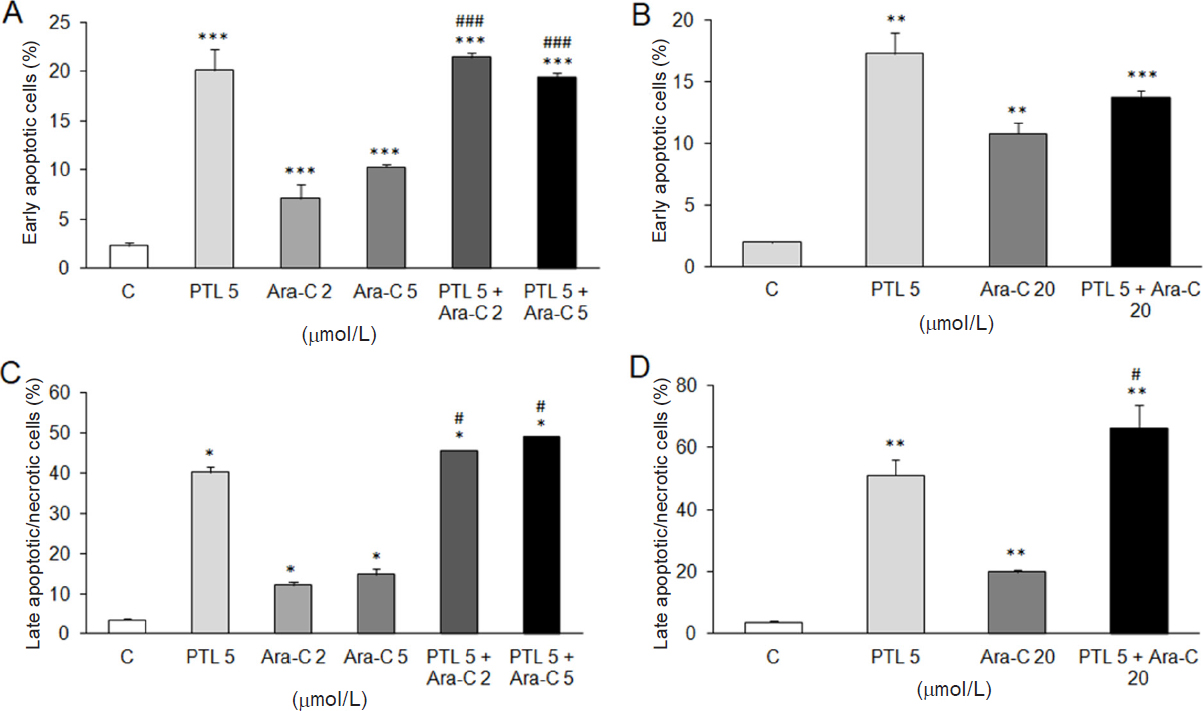 Figure 3. Influence of examined compounds on apoptosis and necrosis of HL-60 cells after 24 h of incubation. After incubation the HL-60 cells were stained with propidium iodide and Annexin-V-APC and analyzed by flow cytometry. C: control; PTL: parthenolide; Ara-C: cytarabine

The addition of NAC to the incubation significantly limited the effect of PTL, reducing the number of dead PI-positive cells to values close to those of the controls [Figure 4A]. In contrast, there was no significant effect of NAC on the cytotoxic activity of Ara-C [Figure 4A]. The addition of NAC to co-incubates of cells with PTL plus Ara-C at the dose of 5 or 20 μmol/L significantly reduced the number of dead PI-positive cells by almost 50% of the value, compared to incubation without NAC [Figure 4A]. 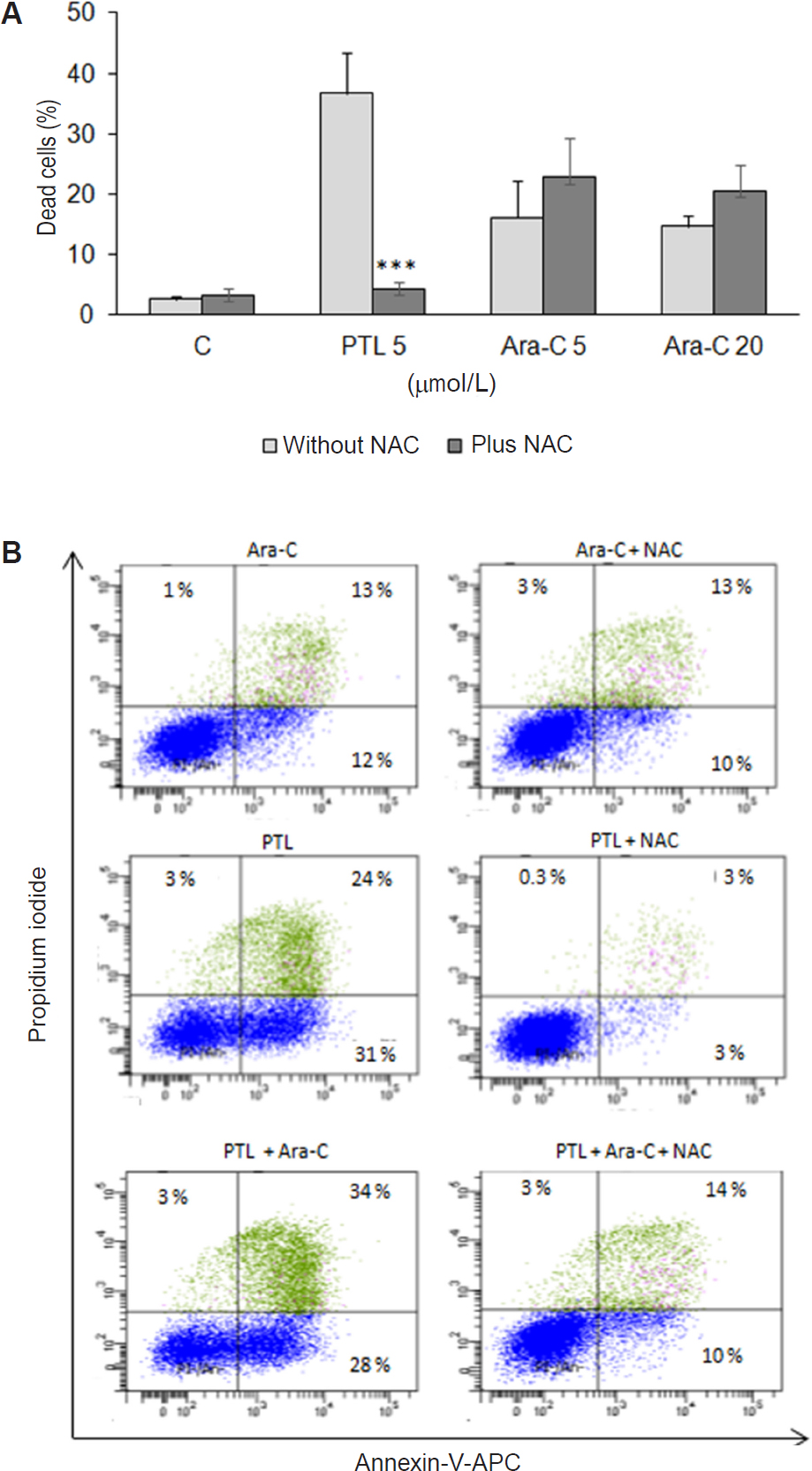 A similar effect was observed when examining apoptosis. NAC reduced the number of early and late apoptotic PTL or combination of PTU plus Ara-C-induced cells and had no effect on Ara-C induced apoptosis [Figure 4B].

An important element of the cytotoxic action of PTL is the induction of oxidative stress. As a result of this mechanism, PTL may act more cytotoxically in cells with an increased level of oxidative stress, which occurs in cancer cells. The mechanism of its pro-oxidative action does not only have to consist of the binding of a lactone moiety with cytosine in the thiol groups of GSH and enzymes participating in the GSH metabolic pathway. In addition, in cells with a high constitutive MPO activity, it can be oxidized to free radical forms, which increases its pro-oxidative properties[20]. As a MPO substrate, PTL can exert potent cytotoxic effects in promyelocytic leukemia cells. This very strong cytotoxic effect, depending on the level of free radicals, has been demonstrated in these studies. This is demonstrated by the reduction of the cytotoxic effect of PTL to the level of control values, after addition of NAC antioxidant for incubation. Other studies suggest that PTL may exhibit a dual action, which is based on increased cytotoxicity in cancer cells with high levels of oxidative stress and relatively low cytotoxicity in normal cells with low levels of free radicals[21,22].

The concentration of 5 μmol/L PTL tested in the present study also had potent cytotoxic effects in other studies: in cells isolated from patients with myeloblastic leukemia without maturation and puberty characteristics, acute myelocytic leukemia and acute monocytic leukemia, and from patients with MDS[15]. As shown by the authors, the percentage of colony-forming units of AML cells was significantly lower after treatment with PTL at a concentration of 5 μmol/L[15].

Our research is in line with the results of Guzman et al.[15], who showed that PTL is more cytotoxic to AML cells than Ara-C. In the case of Ara-C, we did not observe any cytotoxicity relationship with pro-oxidative activity at the concentrations used, since the addition of NAC for incubation had no significant effect on the percentage of dead cells under the influence of this cytostatic drug. In addition, the concentrations of Ara-C of 5 and 20 μmol/L used did not show significant differences in cytotoxicity. These results are in line with the studies of Guzman et al.[15], who demonstrated that Ara-C reaches a plateau at concentrations above 7.5 μmol/L in cells isolated from AML patients[15].

Using co-incubation of PTL with Ara-C, we obtained a synergistic effect, the strongest expressed in the highest applied concentration of Ara-C (20 μmol/L). PTL enhanced the Ara-C effect in each combination. The synergism of these compounds has previously been observed in acute myeloblastic leukemia cells without maturation, monocytic leukemia cells and MDS, and the strongest has been observed in the case of acute myeloblastic leukemia[7].

The present study also shows that the addition of NAC to the incubation significantly reduces the cytotoxic and proapoptotic effects of the combination of the two compounds tested, which indicates a significant contribution of oxidative stress in their combined action.

On the basis of the obtained results, it can be concluded that PTL may significantly increase the effect of Ara-C, and that, in the synergistic action of these compounds, oxidative stress plays a major role. PTL may, therefore, be a further target of research to improve the efficacy of acute promyelocytic leukemia therapy. In addition, more research is needed using other leukemia cell lines such as: ML-1, RAji or Jurkat in order to confirm the cell-type-specific effect.

Critical revision and finalizing of the manuscript: Papież MA

Availability of data and materials

Own original data, subject to copyright, are presented in this publication.

Research was partly funded by the Jagiellonian University Program (K/ZDS/007890).

Both authors declared that there are no conflicts of interest.

Ethical approval and consent to participate 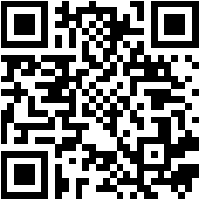