We describe a 47-year-old transgender woman with a history of non-medical grade silicone injections given by unauthorized persons 15-20 years prior to presentation who developed interstitial pneumonitis. She suffered acute exacerbations of pneumonitis, developed pulmonary fibrosis with terminal lung disease, acute respiratory distress syndrome and ventilator dependence and died of her illness. In light of the increasing awareness of the health concerns of the transgender population, we review here in the acute and chronic effects of silicone on the lung.

A 47-year-old transgender woman was treated for pneumonia 9 months ago when she presented with cough. She had a history of morbid obesity, hypertension, asthma, hyperlipidemia, history of large volume non-medical grade silicone injections 15-20 years ago, ongoing cigarette smoking, previous history of unprotected sexual relations and substance abuse including injecting cocaine, heroin. HIV status, hepatitis B and C titers and Quantiferon testing were repeatedly negative in the past. 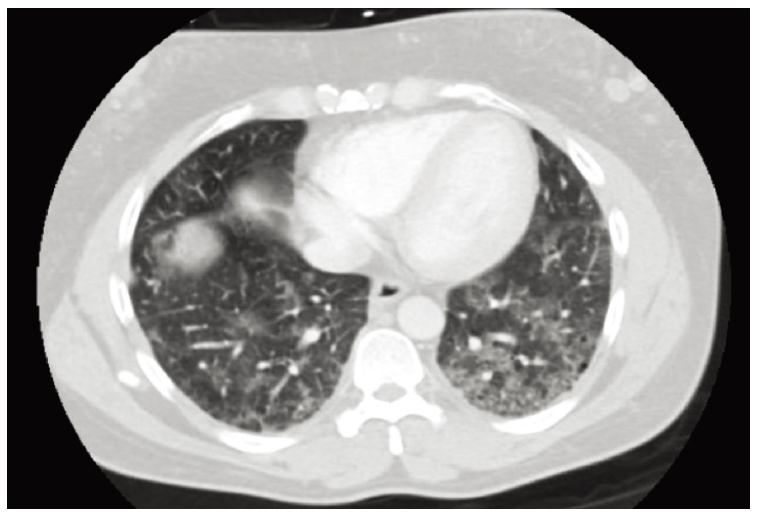 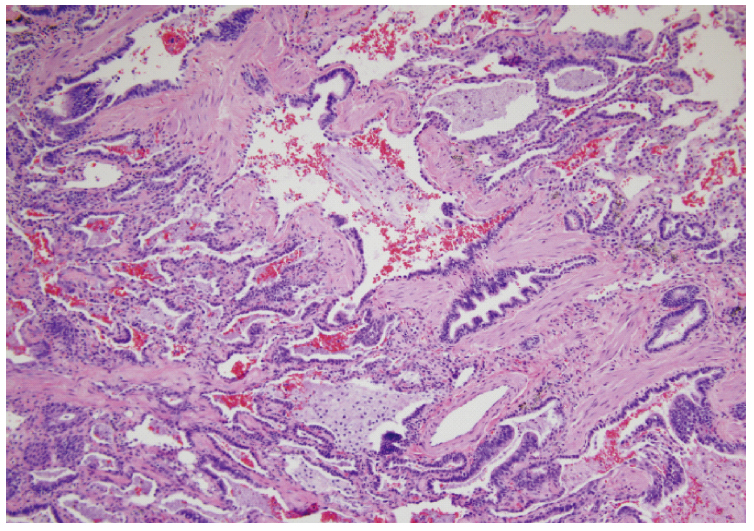 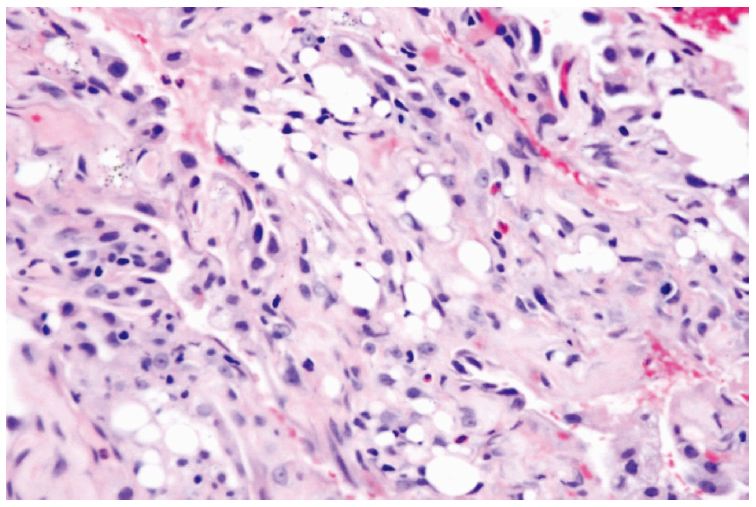 She was managed appropriately after surgery and was discharged with slow taper of oral steroids. However she was readmitted with worsening dyspnea from pneumothorax requiring chest tube decompression, and later was intubated for worsening hypoxia from acute respiratory distress syndrome. Bronchoalveolar lavage collected after intubation revealed acute inflammation with 40% macrophages with 43% segmental neutrophils and 17% lymphocytes. She had a long tenuous course in intensive care unit, on intravenous steroids and broad spectrum antibiotics with worsening hypoxia and given poor chances for recovery, family opted for palliative ventilator withdrawal and she expired shortly after that.

Liquid silicone presumed to be inert is used for cosmetic purposes however there are reports of local complications of infection, necrosis and systemic complications of connective-tissue disease, lymphadenopathy[1], and pulmonary manifestations.

Number of silicone injections, amount of silicone and contaminants associated with silicone determine degree of inflammatory and fibrotic response. Clinical course is determined by pathological changes in lungs and host immune responses. There are multiple case reports of acute pneumonitis, silicone embolism, alveolar hemorrhage however there are only few case reports of chronic pneumonitis. Majority of chronic cases are seen in transgender woman with HIV infection as was reported in 2 case reports[4,5] or related to development of autoimmunity[6] as was reported in a woman 30 years following mammoplasty[7]. There is 1 case report of a patient developing pulmonary fibrosis 5 years after silicone injections with relatively stable disease[8]. To our knowledge, this is the first report of a patient presenting with symptomatic lung disease 15-20 years following multiple non-medical grade silicone injections with no evidence of HIV or autoimmune disorders. Her severe presentations were most likely due to silicone induced pneumonitis/chronic fibrosis with some contribution from smoking. Pathology also supports changes due to silicone such as interstitial globular material deposition with vacuoles, peribronchiolar metaplasia. After becoming symptomatic, she remained steroid dependent with continued worsening leading to terminal lung disease, ventilator dependence with very high oxygen requirements and death. Continued education of transgender community about side effects of non-medical grade silicone is henceforth required.

Conception and design of the article: Sridhara S, Sivaswami S

The patient’s sister who is the medical power of attorney provided their informed consent for publication.

The work has received the approval by our Ethics Committee. 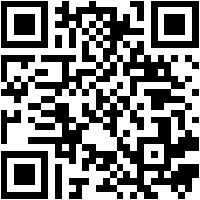