Benign leiomyoma metastasizing to the lung: a case report and a brief review of the literature

The authors have investigated a rare clinical condition consisting of a benign metastatic leiomyoma (BML) spreading in the lung, in a young woman. A 42-year-old woman affected by multiple pulmonary nodules histologically diagnosed as metastases from uterine sarcoma (one of them has been resected in the past and a pathologic diagnosis of uterine leyomiosarcoma was done) in concomitance with uterine bleeding, was referred to the Radiation Oncology Department of Taranto (Italy) Hospital, with the aim to perform an hemostatic radiotherapy after 4 cycles of induction chemotherapy. The patients underwent a myomectomy 9 years before. An accurate tissue samples review was performed both on myomectomy sample and on lung specimens, and as result, a diagnosis of BML was done, mainly on the basis of the mitotic activity. The patient was successfully treated with hysterectomy and oophorectomy followed by megestrol therapy, and a partial remission of the lung disease was obtained. Pulmonary metastatic leiomyomatosis should be considered in a premenopausal woman bearing a uterine myoma. The evaluation of the mitotic activity should be considered as the most reliable feature available to distinguish BML from uterine sarcoma.

Several entities classified as smooth muscle neoplasms can be detected in the lung. These cases, as histologically characterized by smooth muscle cells, may be lung metastases from primary leiomyosarcomas, pulmonary prominent smooth muscle hamartomas, leiomyomatous hyperplasia or lung metastases from benign metastatic leiomyoma (BML). Radiology and immunoistochemistry assay can help the clinicians to differentiate among these diagnoses. BML is a condition rarely described in the literature.[1] This entity is an asymptomatic metastatic manifestation from an uterine myoma which maintains its benign behavior and hormonal responsiveness also in its metastatic sites.[2] BML has to be distinguished from other smooth muscle neoplasms of the lung, and its diagnosis needs to include these features: a positive anamnesis of uterine leiomyoma in a premenopausal woman, a computed tomography (CT) of the chest demonstrating multiple and well circumscribed nodules in the lung, low fludeoxyglucose positron emission tomography (FDG-PET) uptake and a number of pathologic characteristics. Histologically, BML is characterized by high expression of estrogen/progesterone receptors and a low mitotic activity.

Surgery and hormonal therapy are the standard of care for BML management. Herein we report a case of a patient in which BML diagnosis was done after a previous incorrect diagnosis of lung metastasis from sarcoma not responding to chemotherapy. The review of the tissue samples derived from lung metastases, coupled with the anamnesis of previous benign myoma resection, helped us to achieve a definitive and correct diagnosis. As a consequence, the patient underwent hystero-oophorectomy and megestrol therapy. A partial response was obtained after hormonal therapy and the patient was included in a rigorous follow-up program.

A 42-year-old woman suffering from uterine bleeding was referred to our observation in September 2008, with the aim to perform haemostatic radiotherapy. The patients was a non-smoker, did not consume alcohol and has no other comorbidities, except for a myomectomy due to a symptomatic leiomyomas 9 years before.

A diagnosis of metastatic uterine sarcoma was done 6 months before, on the basis of a CT scan, which detected multiple metastases, and the surgical resection of one of them. Other than bilateral and diffuse lung metastasis [Figure 1], the aforementioned CT scan showed revealed an non-homogeneously enlarged uterus containing multiple necrotic areas [Figure 2]. The lung specimen on wedge resection revealed a diagnosis of pulmonary metastasis from a PgR+ (Progesteron) and ER+/- (Estrogen) leiomiosarcoma, whose primary site was supposed to be the uterus. A first-line chemotherapy regimen consisting of Ifosfamide and epirubicine association was delivered for a total of 4 cycles, without clinical benefit [Figure 3] being the response obtained stable disease, but in concomitance with a worsening of the clinical presentation (the patient experienced a symptomatic metrorrhagia). Moved by the suspicion of a primitive site of origin, different from the uterus, a FDG-PET/CT scan was requested. Interestingly, the whole-body PET scan did not reveal any pathologic up-take, either in lung and in pelvis [Figure 3]. On the basis of this last finding, a revision of the histological specimens on both the resected lung and the miomectomy (performed in March 2000) was requested.

Figure 1. Computed tomography images of the chest (A) and pelvis (B) before chemotherapy. Note the multiple well-circumscribed pulmonary nodules and the enlarged uterus

Figure 2. Computed tomography images of the chest (A) and pelvis (B) after chemotherapy. Findings in the chest and pelvis are unmodified

Figure 3. Fludeoxyglucose positron emission tomography scan images. No pathologic up-take was recorded in the lung (A) and pelvis (B)

The revised results on the miomectomy specimen performed 9 years before showed a cellular leiomyoma with < 5/10 high-power field (HPF) mitosys, mild atypia without coagulative necrosis and marked cellular proliferation. The revised lung specimen identified a leiomyoma with muscular smooth cell proliferation; mild atypia, not relevant mitotic index and no necrosis. In both the tissue samples, an high expression of PgR+ (> 90%), ER+ receptors (< 80%), coupled with mild AR+ and WT180+ were observed. Based on these features, a diagnosis of benign lung metastasizing leiomyoma was done.

The patient underwent a hysterectomy with bilateral salpingo-oophorectomy. The histology was multiple intramural leiomyomas with adenomiomatosis areas and the endometrium showed a proliferative aspect. Given the diagnosis of BUL and the presence of ER and PgR high expression, megestrol therapy was started. During megestrol treatment the patient was meticulously followed with whole body CT scan performed every 3 months. The first CT scan revealed a partial response in that there was reduction of the lung lesions both in number and in size [Figure 4]. Megestrol acetate was administered at a dose of 160 mg twice daily during the first 3 months, subsequently the dose was increased to 160 mg 3 times a day for the following months. Currently, the patients is still alive and presents only 2 small lung lesions (< 10 mm). The last CT scan has been performed on 12th April 2017. We will continue Megestrol Acetate pending progression of the disease. 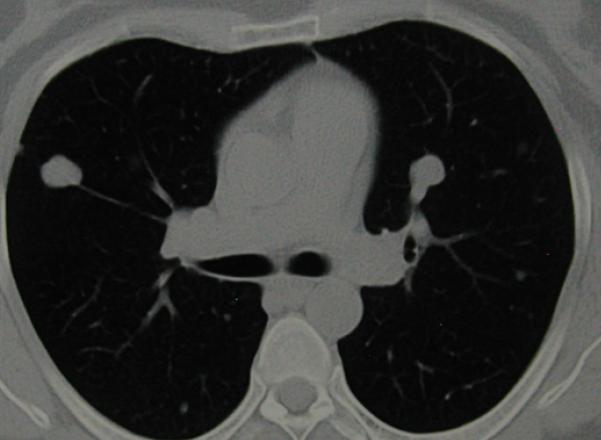 BML is an unusual disorder described for the first time by Steiner in 1939 as metastasizing fibroleiomyoma;[1] Until now approximately 80 cases have been recorded[2] and almost all of them are diagnosed in healthy premenopausal women with anamnesis of uterine resection for uterine benign neoplasms.[3]

The lung is the most common site of hematogenous metastases, although skin, bones and retroperitoneum spreads have also been observed.[4] Usually this disorder is asymptomatic and incidentally discovered and its pathogenesis is largely unknown. One explanation is that lung nodules may be considered as late metastases from a low-grade, well-differentiated leiomyosarcoma. Another hypothesis is that benign uterine smooth muscle tissue may embolize to the lung[5] or smooth muscle neoplasms may arise de novo in the lung as a part of a more generalized systemic leiomyomatosis under control of sex hormones.[6] Diagnosis is done on the basis of histological features and mainly through immunohistochemistry, because the only radiological findings are not diriment. Regarding conventional CT imaging, BML lung lesions appear as well-circumscribed, multiple bilateral nodules ranging from several millimiters to any centimeters, generally not calcified. Whole-body PET/CT using F-18 FDG[7] is largely used with the aim to differentiate malignant from benign uterine tumors; in general myomatous lesions have a low uptake of 18-FDG[8] while uterine sarcomas show a significantly higher uptake.[9]

Uterine leiomyoma has been reported to depend on hormones release; Scuderi et al.[10] in 2016 described a spontaneous regression of pulmonary leiomyomas during pregnancy, so, cure consists of hysterectomy with oophorectomy[11] added to hormonal therapy on the basis of the estrogen and progesteron receptor expression.[12]

In our case, factors like age and positive anamnesis of leiomyoma have led us to suspect BML because it generally occurs in women of childbearing age who have a history of hysterectomy or myomectomy for uterine fibroids.[2] Nevertheless, diagnosis of benign disease needs to be confirmed by proper histological findings, namely mitotic activity, degree of differentiation and invasive growth pattern. For soft tissue smooth muscle tumors, mitotic activity is the most reliable factor, being malignant neoplasms characterized by five or more mitotic figures per 10 HPF.[13] However, when a lung metastasis from BLM is diagnosed, it could be extremely difficult to identify its malignant potential, because mitotic activity in uterine leiomyomas is not static but may change according to the menstrual cycles.[10] In our case the first diagnosis of metastatic leiomyosarcoma on the lung specimen was based on the hystological and immunohistochemical pattern showing positivity for 1A4 (actine smooth muscle), CD10-/+, TTF-1, slightly positive estrogen receptors and positive progesterone receptors. Although the positivity of estrogen and progesterone receptors is considered to be an important feature for the diagnosis of uterine malignancy,[14] the mitotic activity was not evaluated on the lung specimen leading to the wrong diagnosis oh leiomyosarcoma initially. After pelvic surgery, due to the estrogen and progesterone positive receptors status of the lung nodules, we decided to use megestrol, according to previous experience.[15] The result was a partial regression of the lung disease.

In conclusion, not all multiple lesions in the lung may arise from an uterine malignant disease because several benign entities need to be included in the differential diagnosis of pulmonary nodules. The diagnosis of BML should be suspected in women in childbearing age who have a history of hysterectomy or myomectomy for uterine fibroids. The report of mitotic activity in a lung biopsy specimen is not mandatory but should be performed. The natural history of BML strongly differs from that typical of the leiomyosarcoma, being characterized by indolent and hormone therapy responding disease. We have described a case of BML, which has been considered a rare entity in literature, having been diagnosed in only a few hundred cases;[16] but the real impact of our experience is the possibility to obtain a total regression of a metastatic disease employing a hormone therapy, with very low toxicity.

Conception and design of the article: G. Lazzari

The patient provided their informed consent for publication.

The work has received the approval by our Ethics Committee. 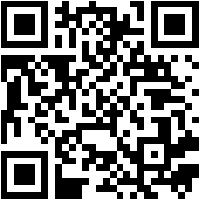