Aim: Oral fluid represents a mirror of the body and saliva has the potential to be used in the detection and diagnosis of diseases. The present study aimed to investigate the potential of salivary carbonic anhydrase (CA), salivary pH and phosphate buffer concentration as biomarkers of dental caries in children saliva.

Methods: The study included 120 children of 3-5 years and 13-15 years of age group. Each age group was divided into two subgroups according to risk of dental caries: low and high caries risk groups. Two saliva samples, stimulated and non-stimulated, were collected from each child in all groups and were analyzed for CA, phosphate buffer concentration as well as pH values.

Conclusion: The results suggest that salivary CA, phosphate buffer concentration and pH values represent potential biomarkers for the estimation of dental caries risk incidence in children, however, further studies with more patients’ samples are recommended to confirm the results.

Dental caries is a consequence of dental hard tissue dissolution under cariogenic conditions of the dental biofilm. It is considered a complex phenomenon involving internal defense factors, such as saliva, tooth surface morphology, general health, and a number of external factors, e.g. diet, the microbial flora colonizing the teeth, oral hygiene, and fluoride availability.[1] Caries risk assessment is the determination of the likelihood of the incidence of caries during a certain time period or the likelihood that there will be a change in the size or activity of lesions already presents.[2]

An accurate caries risk assessment can identify patients at high caries risk for preventive therapies and improve treatment effectiveness. In particular, the roles of saliva and its biological components have been extensively studied for their possible relevance to dental caries, which is the focus of this study.[3]

Non-invasive salivary analysis has great potential in clinical applications because it contains a wide spectrum of analytics, which can serve as biomarkers for assessment of oral and systemic health. This study intends to clarify the impact of some salivary components on caries risk in children. Salivary factors to be studied are salivary carbonic anhydrase (CA), pH, flow rate and phosphate buffer in both stimulated and non-stimulated saliva.

CA is expressed in most tissues of the human body, participating in pH regulation, carbon dioxide and bicarbonate transport, as well as in the maintenance of water and electrolyte balance.[13-15] Seven isozymes have been identified in mammals, and all are expressed in the alimentary tract.[16] CA VI is a secretory iso-enzyme secreted into the saliva by the serous acinar cells of the human parotid and submandibular glands.[17]

Salivary CA VI is the first salivary protein reported to be associated with the occurrence of caries in individuals.[17] CA VI is believed to provide a greater buffering capacity to saliva by penetrating dental Biofilm and facilitating acid neutralization by salivary bicarbonate.[14] Dušan et al.[18] reported that salivary concentration (activity) of CA VI can definitely be mentioned among the important biomarkers in caries etiopathogenesis.

Patients included in this study were selected randomly from out-patient clinic of Pediatric Dentistry Department, Faculty of Oral and Dental Medicine, Cairo University and a nursery for staff workers of the University. All subjects in this study were selected according to the following criteria: (1) healthy children (medically free); (2) displays no evidence of significant intra-oral soft tissue disease; (3) co-operative child and parent; and (4) agreement for participation in this research (patient consent form). All procedures and outcomes were explained to parents or to child legal guardians. Patients who accepted to participate in this study had signed an informed consent approved by research ethic committee Faculty of Dentistry Cairo University.

One hundred and twenty children were selected in this and were divided into two groups; group 1 and group 2 comprising of age groups 3-5 years and 13-15 years, respectively. Each of both groups was sub-divided, according to their caries index (dmf\DMF), into low caries risk and high caries risk [Figure 1]. 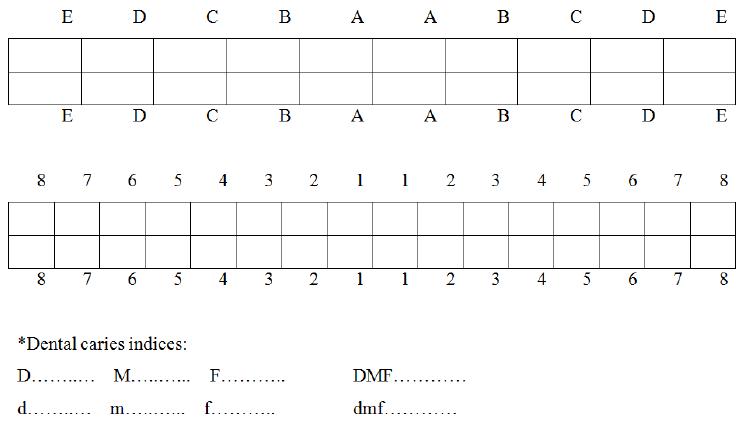 Figure 1. Decayed-Missing-Filled DMF\dmf caries index is one of the most common methods in oral epidemiology for assessing dental caries prevalence among populations. This index is based on in-field clinical examination of individuals by using a probe, mirror and cotton rolls, and simply counts the number of decayed, missing (due to caries only) and restored teeth. dmf: d = decayed; m = missing due to caries; f = filled; DMF: D = decayed; M = missing; F = Filled

All children participated in this study were examined for the following. 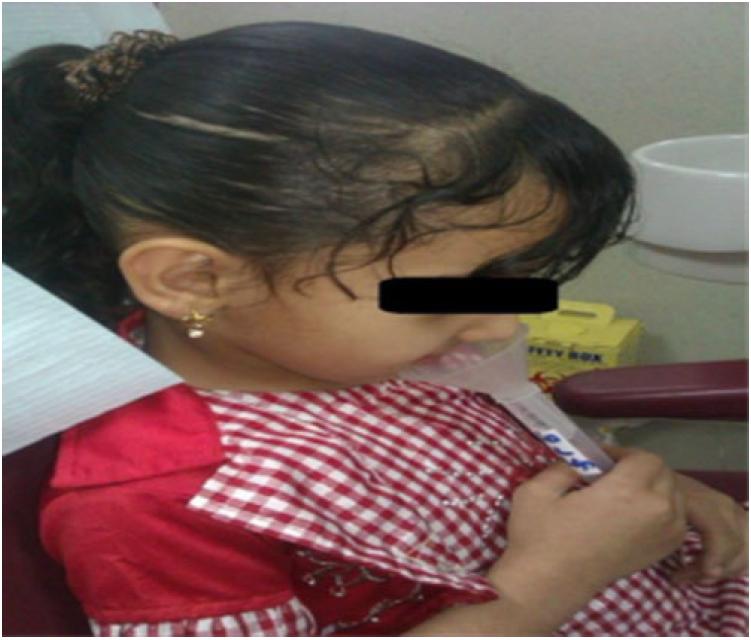 Non-stimulated and stimulated saliva was collected from each group by spitting method and paraffin wax respectively. The flow rate was estimated by asking patient to spit in the graduated tube for 5 min. Samples were used for measuring the following salivary factors: (1) salivary pH using pH 212 microprocessor pH Meter, HANNA instruments, USA; (2) salivary phosphate buffer concentrations using Colorimetric ab65622 (abcam); and (3) salivary CA by Ericsson method. Each salivary factor was correlated individually with the dental caries index of both primary and permanent dentition to establish the effect of these factors on dental caries experience.

In this prospective study, 120 children belonging to age 3-5 and 13-15 years were selected by using stratified sampling procedure, (60 children for each age group), this classification was in agreement with Surdilović et al.[20] This age group was chosen to evaluate the role of various salivary factors in relation to caries incidence in both primary and early permanent dentition. Whole non-stimulated and stimulated saliva were tested in this study.[20] Parotid, submandibular or sublingual saliva were not tested as it is difficult to obtain saliva directly from salivary gland ducts in children. Also whole saliva is considered a reflection of all salivary secretions rather than saliva of a specific gland as reported by Malamud et al.[21] The saliva was collected at morning to prevent circadian variation and the participants fasted for at least 2 h before saliva collection to avoid influence of immediate food consumption and foul contamination.[11,12,20] 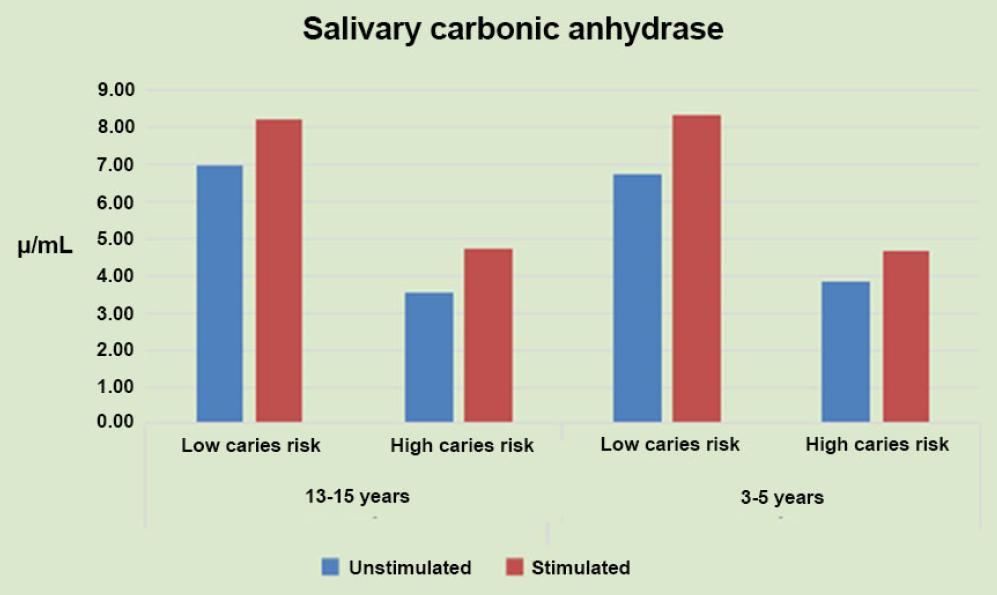 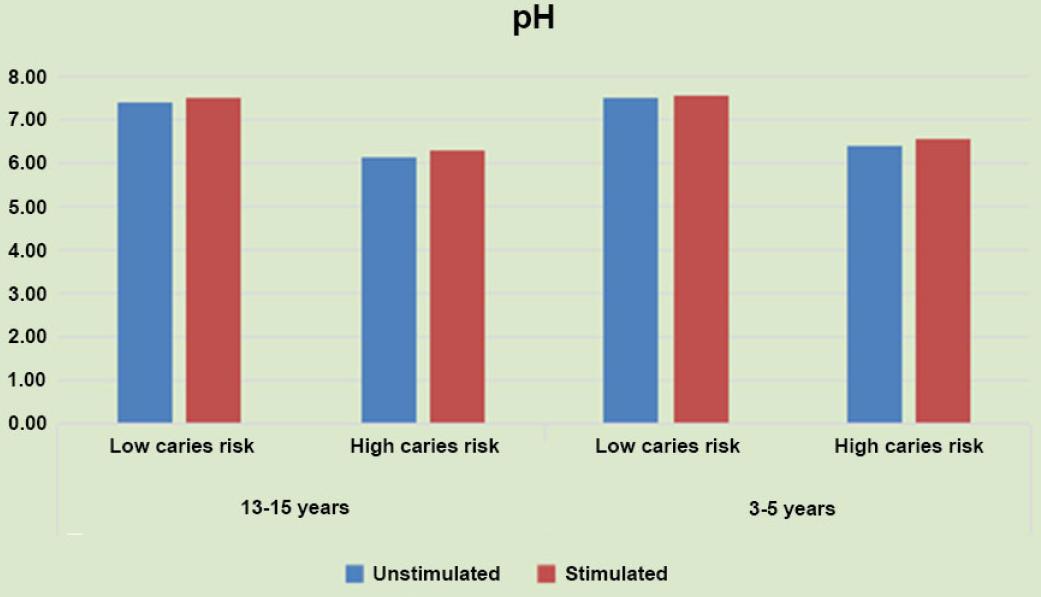 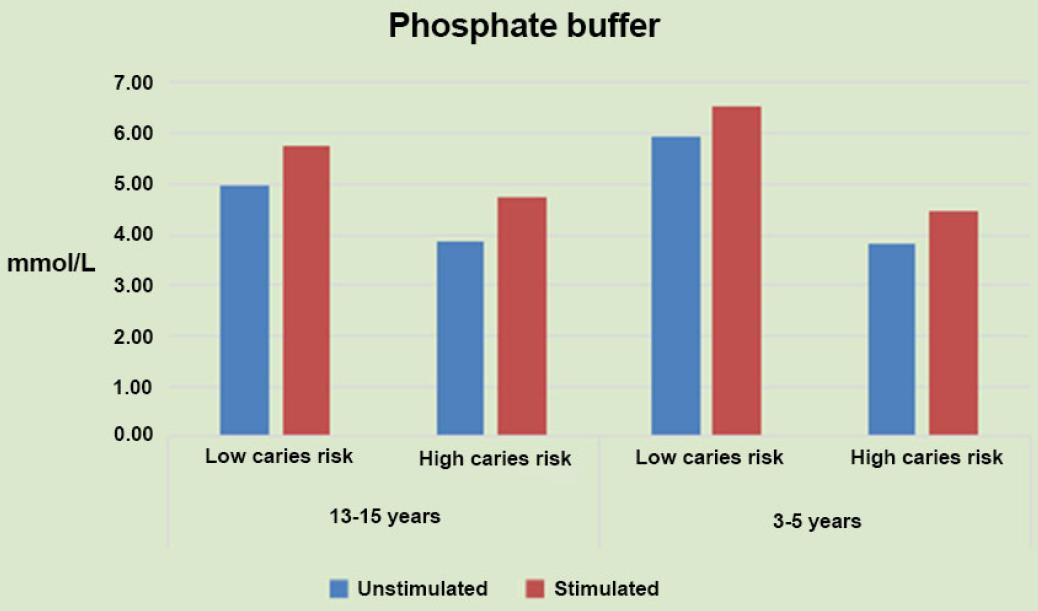 Figure 5. Histogram of the mean of phosphate buffer levels measured in stimulated and non-stimulated salivary samples of patients with different caries risk groups

Our results are in agreement with the results of several studies[19,21,22] that reported that low salivary concentration of CA has been related to increased caries prevalence. It has been reported that CA may protect the enamel surface by catalyzing the most important buffer system in the oral cavity, thus accelerating the neutralization of acid from the local environment of the tooth surface, moreover, it has been demonstrated that salivary CA may accumulate in the enamel pellicle and function as a local pH regulator on the enamel surface and thus would help to prevent dental caries.[19,21-23]

On the other hand, some of our results were not in agreement with other authors.[23-25] This conflict may be due to the difference in method of analysis as our study were able to determine the concentration of salivary CA VI while Frasseto et al.[25] used the zymography method to quantitatively determine the activity of salivary CA VI.[24] Their results indicate significantly higher activity of CA in stimulated than non-stimulated saliva in both examined groups, while Surdilović et al.[20] reported a positive correlation between CA VI concentration and saliva secretion.[26] It should be realized that several factor affect the saliva composition that could changes according to the flow rate, nature and duration of stimulation, and the time of day at which samples are collected. In many studies, these variables have not been adequately taken into account and this may explain the variability in the results of different studies. Consequently, the need for standardization of normal values becomes increasingly apparent when saliva is used for diagnosis. Further studies with more patients’ samples are recommended to determine concentration and activity of CA isozyme in the saliva of preschool children with caries and to investigate the relationship between caries and salivary CA activity, salivary flow rate, phosphate buffer and pH.

The authors thank the patients whose participation made this study possible. They would also like to thank Dr. M. Saad for his scientific guidance and the help in preparing the manuscript.

Patient consent was obtained from the patients.

Ethics approval was obtained prior to the commencement of the study. 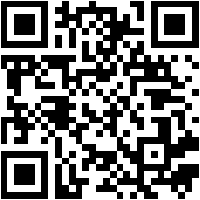